Back2Africa Festival Heads to Ghana for Year of Return

The Adinkra Group, an African Cultural Edutainment Resource and Consulting company based in Washington, DC, is set to launch the second annual Back2Africa Festival and Tour in partnership with The Ghana Tourism Authority and the Year of Return, from 26th of February to the 8th of March 2019 with a line-up of events that focuses on arts, performances, education and service projects in Ghana’s most historic venues in Kumasi, Cape Coast and Accra.

The Back2Africa Festival’s mission is to connect people of African descent with the culture and traditions of Africa and will feature performances from artists traveling from the US including The CrossRhodes, a duo comprised of R&B/Soul Sensation Raheem Devaughn and  hip hop emcee Wes Felton and Farafina Kan: The Sound Africa – an intergenerational West African Drum and dance company.

“The Back2Africa Festival and Tour is important particularly as it truly represents the spirit of the Year of Return. We are a family and community on a birthright journey returning to make connections. It’s the first time to Ghana and the African continent for the majority of our group of nearly 100 travellers aged between 6 – 65 years old who are coming to enjoy Ghana but also to learn, share and exchange their talents, perspectives and energy with Ghanaian people,” sharesDiallo “Daheart” Sumbry,  Founder of The Adinkra Group and a life-long educator who has been travelling to Africa for over 20 years. Mr. Sumbry is a current and founding member of the Year of Return Steering Committee who has been a key figure in the planning and development of the Year of Return, Ghana 2019 program since inception. 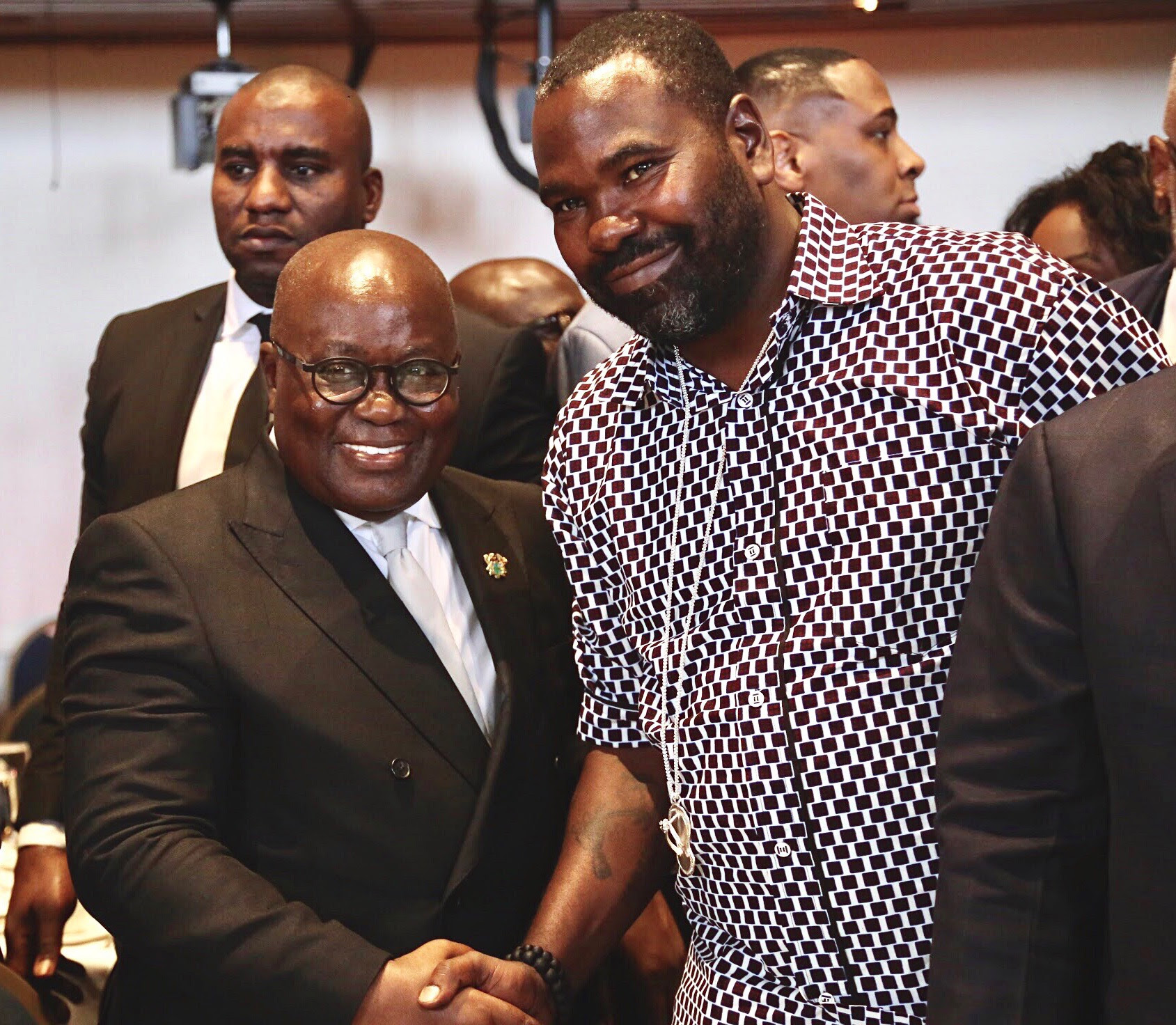 The Back2Africa festival will launch on the 26th of February in Accra with a press reception and a transformation of the Accra Tourist Information Center into the Akwaaba Village, a festive communal ground highlighting live-performances, presentations, local vendors, and African installations to welcome the diasporan community. The Press Reception will feature remarks byMr. Akwasi Ababio, Chair of the Return Steering Committee and director of Diaspora Affairs, Office of the President, Mr. Akwasi Agyeman, Coordinator of the Year of Return and CEO of Ghana Tourism Authority, Rabbi Kohain, Executive Director of the Panafest Foundation, Gail Nikoi, President of the African American Association of Ghana, Nana Adjoa Adobea Asante,acting Director of the National Folklore Board, and the Honorable Catherine Afeku, MP and Minister of Tourism Arts and Culture.

Akwaaba Village will be followed by a special Back2Africa edition of JustMusic hosted by the Accra Unplugged Team x Back2Africa at Django Bar/ Rockstone’s Office on the 27th of February with an intimate live performance featuring Raheem Devaughn & Wes Felton of the CrossRhodes and a special Classic Hip, R&B and Soul DJ set by DJ Face.  A cross-cultural Open Mic/Jam Session in partnership with the African American Association of Ghana (AAAG) featuring artists from Ghana and the US will be held at the Rehab Beach Club on the 28th of February.

The festival will continue on the 1st of March with the Birthright Annual Concert, a family-oriented concert celebrating the African cultural legacy through traditional and modern African drum, dance and theatre at the National Theatre featuring live performances from Farafina Kan (Washington DC), CrossRhodes (Washington DC), youth performers from Ghana International School (Ghana), and GIS Performers (Ghana). The Birthright Annual Concert has been held in Washington, DC for the past 5 years and this will be its first annual instalment in Ghana. 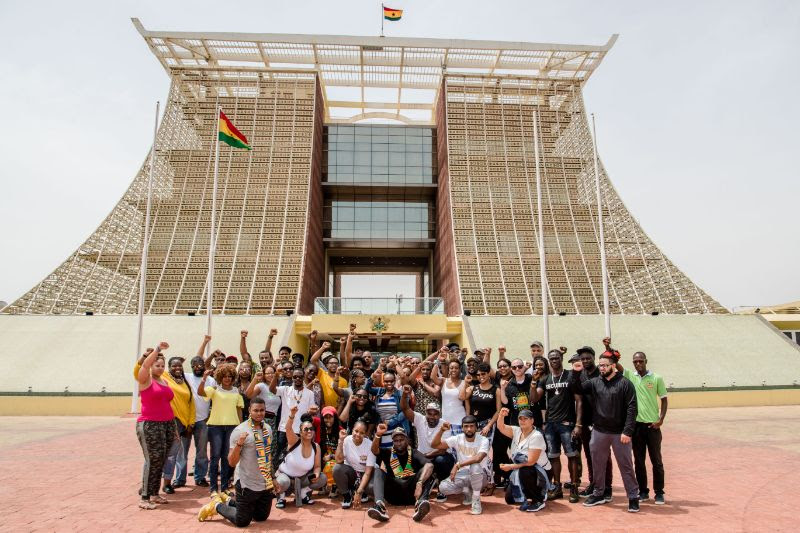 “I believe in Ghana serving as the gateway to Africa and over the past few months have led delegations of leading African-American businesses and organizations to Ghana including the president and staff of Ebony Magazine and the president of the NAACP, to explore partnerships and investment opportunities.  Back2Africa is one way we are committed to looking at ways to rebuild the connections between Africa and her diaspora —culturally, spiritually and financially,” adds Sumbry.

The Back2Africa Festival and Tour will end with a charity cause, Akuapem Educational Service Partnership, at Nyame Bekyre School in Akuapiim on the 7th of March. Working with the International Partnership for Economic and Sustainable Development led by Courtney Bennett, the group will kickstart the fundraiser to raise funds and break grounds for the establishment of a library and borehole in the community.

The Back2Africa Festival and Tour began in 2018 and is part of events scheduled for the “Year of Return”, a year-long calendar of activities in “celebration of the resilience of the African spirit” coordinated by Ghana Tourism Authority, under the auspices of the Ministry of Tourism, Arts and Culture. Back2Africa festival partners include the Ghana Tourism Authority, South African Airways, SunSeekers Tour, WaxPrint Media, African American Association of Ghana (AAAG), Ghana International School (GIS), and African Ancestry.

Jonilar is a Ghanaian Publicist, Tourist and Brand expert. He has been nominated for a couple of awards including African Youth Awards,Ghana Music Awards South Africa in the category of “Blogger of the year” category. He writes on Music, Tourism, Digital marketing, Youth development etc. Mobile:+233246106248 E-mail:Jonilaronline@gmail.com
@@Jonilar
Previous Thousands Turn Up For Volta Music Awards Nominees Jam in Aflao.
Next Shatta Wale – Signboard (Prod. By PAQ & ChenseeBeatz)

Black History Month: What is it and why do we need it?